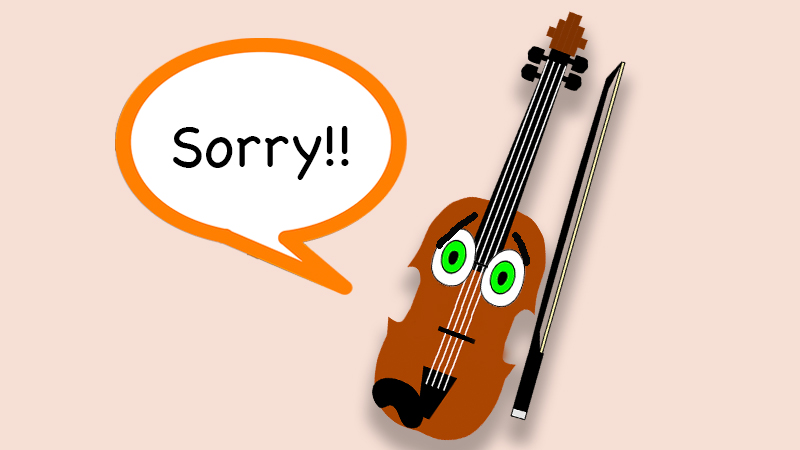 I've had so many students apologize for making mistakes, especially when trying something new and failing to do it perfectly on the first try. When I read that on fiddler Andy Reiner's Instagram page, I had to smile in recognition.

There is no need to apologize, stop it!

Reiner - a fantastic fiddler and teacher (also known as the Skiing Fiddler) - has a general philosophy that he has summed up in a succinct way that we can all understand:

"You have to suck at something before you can be good at it."

To put in terms my grandmother might have liked better: you have to be bad at something before you can be good at it. If you are truly challenging yourself and trying something new, it's going to be too hard at first, and you'll make mistakes. That's okay. Keep reading...

November 29, 2022, 4:28 PM · In an effort to promote the coverage of live violin performance, Violinist.com each week presents links to reviews of notable concerts and recitals around the world.

Cellist Gautier Capucon performed Lera Auerbach's "Diary of a Madman, Concerto for Cello and Orchestra" with the Chicago Symphony Orchestra.

November 29, 2022, 9:00 AM · On Tuesday the Elevar Foundation announced the selection of 20 violinists to participate in the 2023 Elmar Oliveira International Violin Competition (EOIVC). The competition will take place in Boca Raton, Florida, from January 15 through January 29, 2023, at Lynn University.

The 20 quarter-finalists were selected from 60 applicants representing 17 countries who submitted videos to Youtube for the Preliminary Round in November 2022. The quarter finalists
range in ages from 18 to 28. They represent 13 countries: Bulgaria, Canada, China, France, Hong Kong, Israel, Italy, Japan, Luxembourg, South Korea, Taiwan, United Kingdom, and the United States.

Here are the EOIVC 2023 Quarter-Finalists:

November 27, 2022, 9:32 AM · Last night I finally watched the TwoSet Violin's Four Million Subscriber Concert, which they held with the Singapore Symphony Orchestra:

Here's the video concert livestream - it is cued up to start with TwoSet.

I’ve been watching TwoSet for roughly five years now, first on Facebook, and then subscribing to their YouTube channel. They’ve quickly grown a massive following on the platform, which is well-deserved. Not only are they able to make funny videos of classical music for entertainment and education, they are both genuinely excellent performers.

Thus, every time they reach a subscriber milestone, they take turns playing a big concerto. For two million, Brett played the Tchaikovsky, and for three million, Eddy played the Sibelius. In both of these cases, the person not playing the solo part would play an orchestra reduction on a single violin. This worked well with their duo appearance, but it doesn't compare with the incredible opportunity they were given for their four million subscriber concert: Brett performing the Mendelssohn Violin Concerto with a full orchestra!

Teaming up with Tarisio to procure two gorgeous Golden Age Stradivarius violins from 1708, as well as the Singapore Symphony Orchestra to accompany them, Brett and Eddy played an incredible concert. The concert was livestreamed from the Singapore Victoria Concert Hall, with beautiful camerawork and captions describing the pieces and events. Keep reading...

V.com weekend vote: How many fine tuners do you have on your tailpiece?

Are You Actually Practicing? The Anatomy of Deliberate Practice

V.com weekend vote: When and how did you start learning music theory?